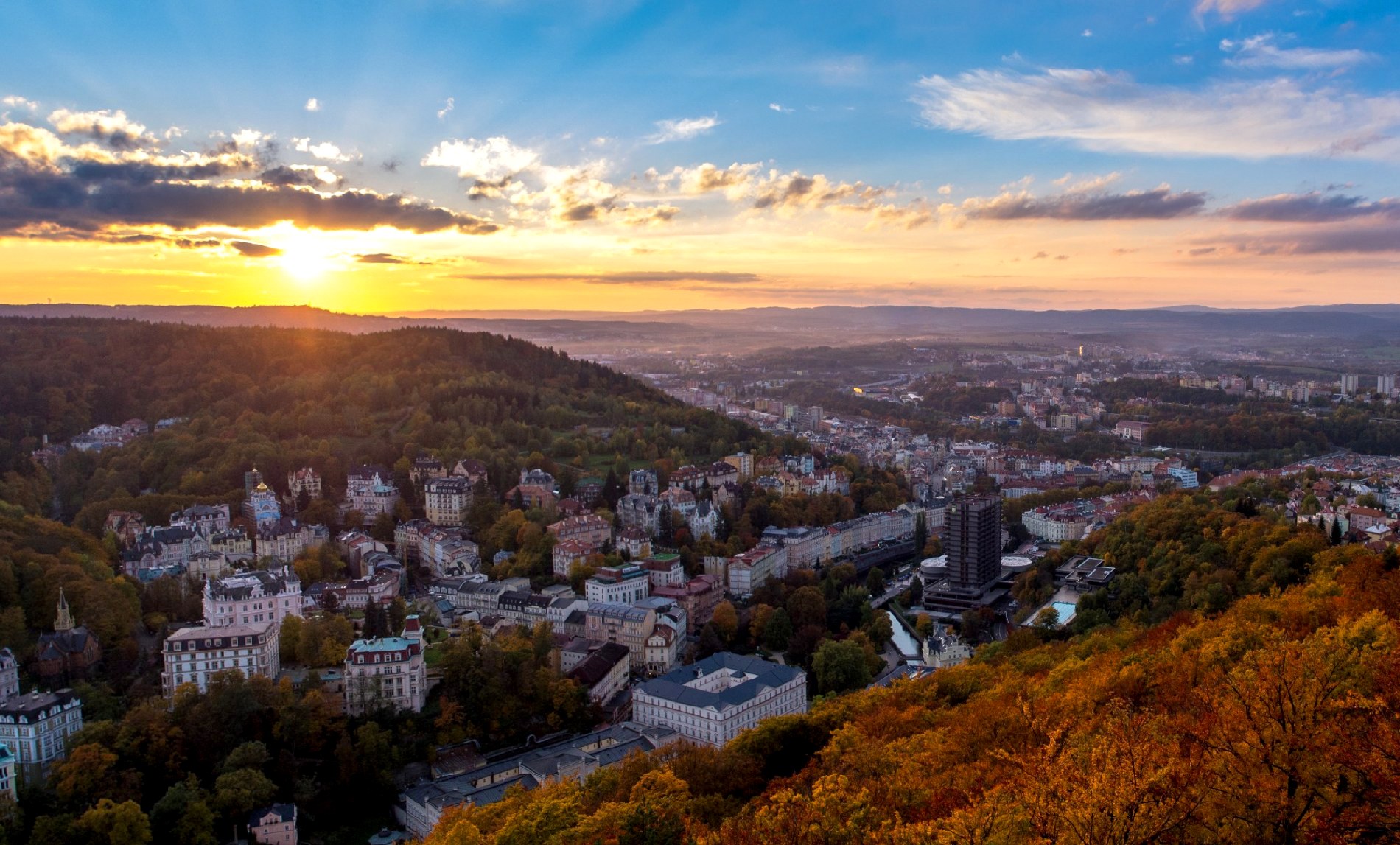 The exact date of the city establishment is unknown. The origins of a settlement near the Hot Spring (Vřídlo) dates back to around 1350. Written history begins on the date August 14th 1370, when the Emperor Charles IV granted Karlovy Vary the so-called ‘elbow city law’, a privilege with the rights of the royal city according to the model of nearby city Loket. Since then the city has gradually become more important and has become a renowned spa, cultural and social place. Nowadays, the most famous Czech spa resorts are a favourite destination for visitors from all over the world. The spa treatments continue with the tradition that started centuries ago during the reign of Emperor Charles IV.

Something from the history

The spa town started to operate soon after its foundation but the real boom did not come until the 16th century. At that time, in Carlsbad spa treatments started and building development began. Unfortunately, this period lasted only a short time. The budding prosperity was interrupted by natural disasters (a catastrophic flood in 1582 and a devastating fire in 1604) and turmoil from the Thirty Years' War.

A more significant revival of spa life took place at the end of the 17th century with the influx of wealthy aristocrats from the Saxon, Polish and Russian rulers’ courts. The Tsar Peter the Great’s two visits to Carlsbad in 1711 and 1712 were a huge promotion of the spa town.

The 18th century brought the city of hot springs a long decade of prosperity and fame. In the first half of the century Carlsbad experienced the special favour of the Habsburgs, especially the Empress Maria Theresa. Loyal relations with the court of Vienna were positively reflected in financial grants for the city's development and improvement of its administration. In connection with the development of spa facilities, a number of social and spa buildings were built.

The lifetime work of Dr. David Becker (1725 - 1792), the most important city physician, was crucial for the modernization of Carlsbad's balneology. The idea to use fresh spring water was given by Dr. Václav Payer in 1521, but Dr. David Becker was able to perfect this method by the end of the 18th century. He also managed to achieve a balance between drinking and bathing treatments, carried out the first scientific analysis of Carlsbad’s mineral waters, and dealt with an individual treatment according to the patient's diagnosis. At his instigation, since 1764 a spring thermal salt has been produced and exported from Carlsbad.

At the turn of the 18th and the 19th century the society in Carlsbad was increasingly gaining an international character. The most prominent visitors were Johann Wolfgang Goethe, Friedrich Schiller, Ludwig van Beethoven, Fryderik Chopin, Nikola Paganini and others.

In the 19th century a new spa boom came to Carlsbad, with the last third of the 19th century seeing extensive construction work and the building of modern spa facilities. This construction work, carried out by the architects and builders Ferdinand Fellner and Hermann Helmer, brought the city its current architectural appearance with significant inspiration from historicism and Art Nouveau. Dominant spa buildings such as the Spring Colonnade (1879), the Mill Colonnade (1871 - 1881), the Market Colonnade (1883), the Spa III (1866), the magnificent building of the Imperial Spa (1895), the new Municipal Theater (1886), the Anglican Church of St. Lucas (1877), the synagogue (1877) and the Russian Orthodox Church of Saints Peter and Paul (1897) were built during this period.

At the turn of the 19th and 20th centuries the prosperity of the spa facilities was so distinctive that for this period a term the ‘Golden Age’ of Carlsbad was used. About 70,000 guests were treated here every year.

The First World War ended the improving spa city developments. Although the spa life of Carlsbad was quickly restored after the end of the war, the city was far away from reaching its level of pre-war visitors. Not only the war, but also the demise of the Austro-Hungarian Empire and the lifestyle change of Europe's inhabitants greatly influenced the prosperity of the city.

The economic crisis that followed World War II and then normalization only increased the problems of Carlsbad. Spa life had nearly stopped completely. At the time of the Communist regime the fame of the spa town had not returned. The spa treatment was centralized and nationalized after 1948. In the period of socialism (1948-1989), the development of the city was manifested predominantly in the form of massive housing constructions. The spa architecture of this period is represented by the Spring Colonnade (1975) and the Thermal Hotel (1977).

After 1990, many important historic buildings were renovated, reconstructed or replaced by replicas. All the spa facilities have been privatized and an era of free city development has started again. The most famous Czech spa resorts in Carlsbad are, as in the past, a favourite destination for visitors from all over the world. Spa treatments keep following the tradition that started centuries ago during the reign of Emperor Charles IV. An international character of Carlsbad and reputation of its healing springs are a guarantee that the hot-spring city will remain the most famous and most visited place in the Czech Republic after Prague.

The legend about the founding of the city of Carlsbad

The Emperor Charles IV arranged a hunting trip to mountain forests and valleys during his stay at Loket Castle. While hunting one of the dogs ran after a wild animal and suddenly fell into very hot water. The members of the expedition drank the boiling water and informed the Emperor about the incident. He immediately went to check the forest spring with his retinue and doctors. He tried the water himself and because he felt suddenly relieved, he attributed beneficial effects to the local springs . The neighbouring area was soon settled by new inhabitants and the settlement was named Hot Spas at Loket. As an expression of respect, the new spa town was later named the Spa of Emperor Charles. Carlsbad and has become a well-known and popular place.

In the 18th century, due to romanticism, the legend was modified to its present form, when a deer jumps from the rock called the Deer Jump right into the Hot Spring.